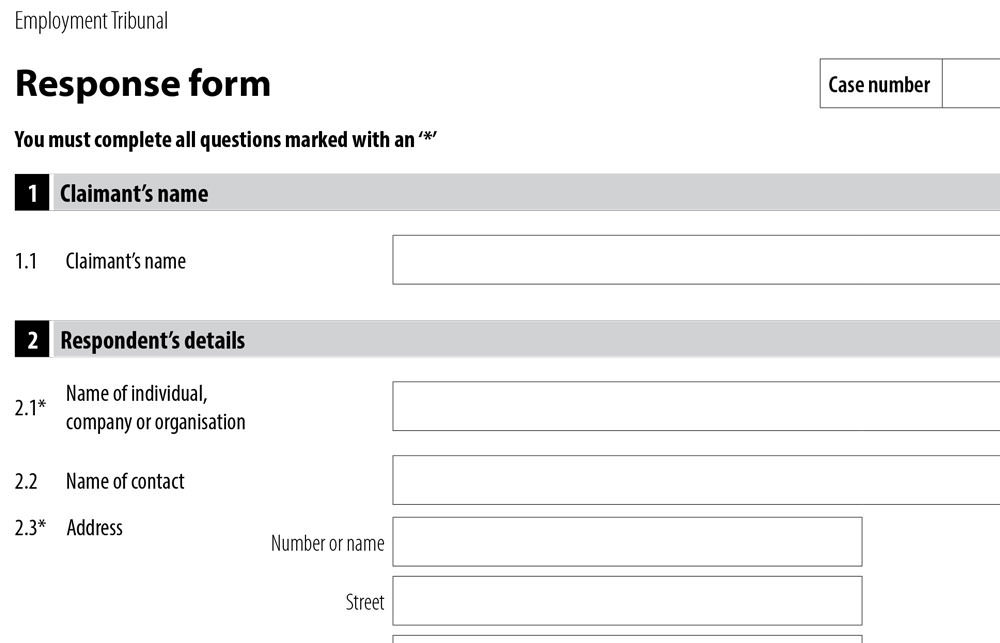 You’ve received an ET1 Claim Form from a former or current employee – what do you do next?

Your defence (on form ET3) needs to be received by the Employment Tribunal within 28 days of the date on which the ET1 claim form was sent to you.

It is very important that the ET3 is carefully and properly drafted – we can help with this.  The ET3 should not simply deny the claims – it should set out your version of events and provide an explanation for any facts or circumstances that the Claimant has relied on in support of their case.

Once the tribunal has accepted your ET3, it will send a copy to the Claimant.  If you have instructed us to represent you, all future correspondence from the Employment Tribunal will then come direct to us as your nominated representative.

An Employment Judge will then review both the ET1 and the ET3 and either send both parties a written “case management order”, setting out a timetable of things to be done to prepare the case for final hearing, or set a date for a “preliminary hearing” to take place, either by telephone or at the Tribunal itself, to decide the appropriate timetable after hearing from the parties’ representatives.

The usual timetable of steps to prepare the case for final hearing includes the following:

The directions order will usually set the date(s) for the final hearing.  The number of days that the hearing is listed for will depend on the complexity of the claim and the number of witnesses that each side intends to call.

The Day of the Hearing

After you have reported to reception you will be directed to a waiting room.  There are separate waiting rooms for Claimants (employees) and one for Respondents (employers).  Full hearings tend to be scheduled to commence at 10.00 a.m. although there are often delays – sometimes the Tribunal Panel will take time to read the papers prior to the hearing.

Before the hearing begins, it is quite usual for last minute offers of settlement to be made and for negotiation to take place.

Employment Tribunals are less formal than the High Court and County Courts.  For example, no-one wears wigs or gowns.  The Tribunal Panel will hear the evidence and decide on the case.  The Panel is made up of:-

The Panel will be seated at the front of the room behind a raised desk.  The Respondent and the Claimant and their advisors sit at desks in front of the Panel.  Representations and evidence are given from a seated position.  There are chairs at the back of the room where witnesses or members of the public sit.

Everyone who gives evidence to the Employment Tribunal has to swear an oath or affirm to the tribunal that the evidence that they are going to give is true.  Witnesses give their evidence seated at a table in front of the Panel and in-between the Claimant’s and the Respondent’s table.  Witnesses should address the Judge and Panel members as ‘Sir/Madam’.

The parties will have prepared a document’s bundle will before the hearing, consisting of all papers relevant to the case (i.e. papers referred to in witness statements).  It will be referred to throughout the hearing and witnesses will be ‘taken to’ certain parts of the bundle when giving evidence or being cross-examined.

There is no absolute rule as to which side goes first but generally in unfair dismissal cases the Respondent will give evidence and call any witnesses first.  In discrimination cases, the Claimant will normally be first to give evidence followed by any witnesses.

In the past it has been common practice for witnesses to read out their witness statements.  However, it is becoming more common for the Employment Tribunal to pre-read witnesses statements before the hearing starts, or take them away to read before each witness gives evidence.

Generally the order of proceedings is as follows (using an unfair dismissal case as an example):-

When all the evidence has been heard the Tribunal will retire to consider their judgement before giving its decision (unless the judgement is ‘reserved’ to be given at a later date and/or in writing).

After the judgment, if the claim is successful, compensation will be considered and each party will be asked to make representations in that regard.  The Claimant will present a calculation of losses and may be questioned as to attempts to mitigate losses (i.e. attempts to find alternative work) and as to when alternative work is likely to be found.

Generally, each side will pay their own costs but in certain limited circumstances, the Employment Tribunal may order one side to pay costs to the other (e.g. where one of the side’s has brought or conducted their case unreasonably).

Appeals to the Employment Appeal Tribunal are possible in limited circumstances (e.g. on points of law only – where it is believed the Tribunal has made an error as to the law as opposed to the facts of the case).

How Can We Help You?

We can advise and support you through the process, from receipt of the ET1 Claim Form through to the final Tribunal hearing (unless earlier settlement is reached, which we can also assist with).

We can also provide representation for you at the final hearing, either by ourselves or by trusted barristers who we work with frequently.  We will discuss the options available to you at the time and agree on the most effective (including cost-effective) approach.

For more information and advice, please contact a member of our team.