How do I discriminate against thee

Let me count the ways

Well, had she been around in the 70’s Browning might have been sonnetting about, what now seem to be, extraordinary job adverts. Our Kirsty Alleyne unearthed some 1973 newspapers from underneath some carpets which included the following in the situations vacant sections: 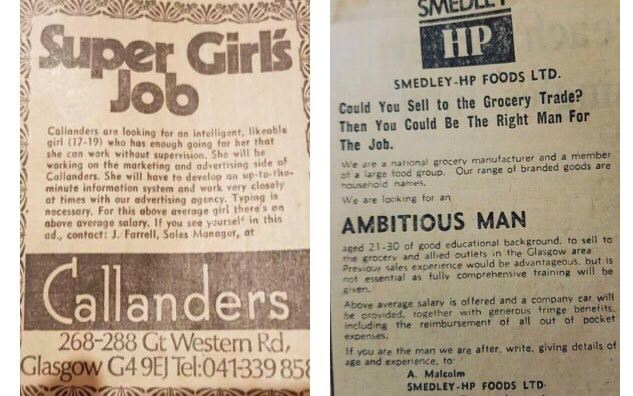 There’s descriptions such as “Super Girls Job (17-19)” for a job in marketing and “Right Man For The Job”, “Ambitious Man” for a job in sales, neither of which appear to be obviously gender specific even for 1973 (but it was a strange year when David Cassidy, Gary Glitter and Slade all had number 1 singles). ‘Different times’ as they say.

Anyway, back to the Utopian times of June 2019 where no one would dream of discriminating against anybody. And in this issue we make sense of some of the complexities that catch employers out when calculating the National Minimum Wage. There is also an update on fair processes when dismissing an employee as well as an important update on record keeping requirements for the Working Time Regulations. Finally, Darren Tibble provides some important news for our local authority clients and contacts about exit payments in the public sector.

NMW – beware of falling foul of the complex calculations

The rules governing the calculation of whether your workers are being paid the National Minimum Wage (NMW) can be complex. Many of you will be aware that certain deductions from a worker’s wages must be taken into account when assessing whether they are being paid the NMW. For example, where a worker is required to wear a top with the company’s logo, this purchase (regardless of whether the worker is purchasing the uniform or a payment is being deducted from the worker’s pay) will reduce the worker’s average hourly wage for NMW calculation purposes because it is a specific requirement imposed by the company. However, if the employee simply chooses to wear a branded top when it is not a requirement, a payment for this item will not reduce pay for NMW calculation purposes.

A fair process when dismissing

Employers are hopefully aware of the requirement to follow a fair process when pursuing disciplinary proceedings, especially when the outcome may result in the dismissal of the employee in question.

What records do employers need to keep regarding working time?

The CJEU confirmed that employers must have “objective, reliable and accessible system enabling the duration of time worked each day by each worker to be measured”.  This is based on the view that the absence of such a system means it would otherwise not be possible for an employer (or the employee) to reliably determine the number of hours worked by an individual and when they were worked. This is particularly required to establish the number of hours of overtime potentially worked in that period and for the calculation of holiday pay etc.  Further, it enables employers to keep under review workers’ health and safety.

Currently, the Working Time Regulations in Great Britain only require an employer to comply with the 48-hour working hour limit in an average week by maintaining “adequate records”.  The Regulations do not currently require an employer to measure and record all daily hours of work or daily or weekly rest periods.  This CJEU decision casts doubt on whether the Regulations are adequate to comply with the Directive’s requirements. In summary, it is sensible for employers to keep more systematic tracking of individuals’ hours worked and rest breaks.

The government has recently launched a consultation on draft Restriction of Public Sector Exit Payments Regulations 2019 and associated draft guidance, which resurrect plans to introduce a £95,000 cap on exit payments in the public sector.

It first consulted on introducing a cap in late 2015, which was followed by the publication of the draft Public Sector Exit Payment Regulations 2016. However, those regulations were never made. They are now back on the agenda…

Our current trainee Laura Kelleher qualifies as a solicitor 1st July and will move to being a junior solicitor in the firm. Congratulation to Laura who has consistently scored very highly in her exams and she will no doubt move seamlessly into the solicitor role having worked very closely with our team during her training contract.

We are already preparing for our Autumn Seminar (sorry to remind you that Summer’s lease is all too short) at the Ageas Bowl. Please bookmark breakfast on Wednesday 9 October at the Hilton Hotel at the Hampshire Cricket Ground. We’ll keep you updated as to topics that will be covered and booking arrangements. It’s free!

This week 100 years ago today… hang-on, checks notes… I mean literally this week in 2019, the Daily Mail has reported on a Tribunal Hearing in which “An ‘arrogant and misogynistic’ aristocrat was ordered to pay more than £150,000 in damages to two women forced out of their jobs because they were pregnant”. This award included aggravated damages for injury to the women’s feelings.

Sir Benjamin Slade was described as acting in a ‘high-handed and oppressive manner’. He claimed two of his employees had ‘timed’ their pregnancies to ‘spite him’. He also falsely claimed both women gave birth prematurely because ‘they had smoked and drank’ during their pregnancies and he made an offensive comment about a claimant’s baby ‘dropping out’.

During the hearing, the Tribunal was shown a TV interview from last year in which Sir Benjamin (aged 73) made ‘belittling comments about women’ when speaking about his search for a wife. He set out a list of requirements for the perfect ‘breeder’, saying he preferred statuesque women, aged between 30 and 40, who could shoot and had ‘stately home’ training.

He claimed he made the comments on the TV show only to attract publicity to his property. However, the Judge said his behaviour in giving oral evidence “entirely matched that shown on TV, namely arrogant and misogynistic”…